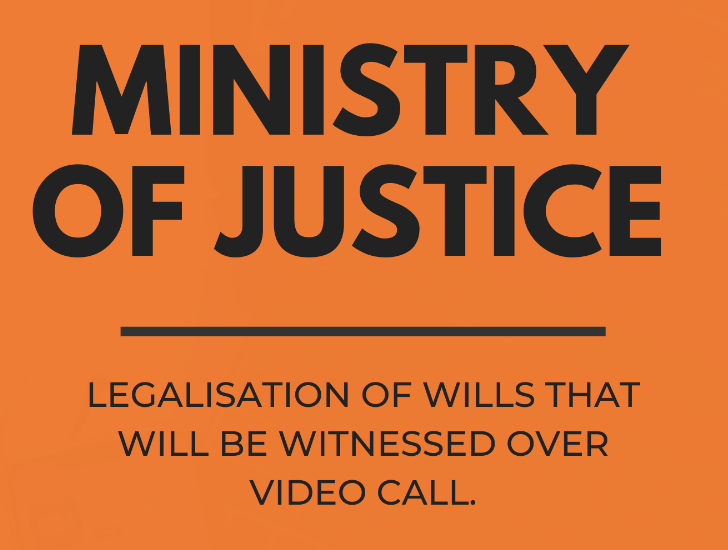 Will Witnessing by video call

July 31, 2020 Liz Killip 0 Comment
Will Witnessing by video call from September has just been announced. It’s been made official from the MOJ and The Institute of Professional Willwriters.

“The M.O.J have declared the amendment to the Wills Act 1837, enabling Wills to be witnessed via online video as of September, using platforms such as Skype and Zoom- which we have all become accustomed to over the last couple of months.

Retrospective will witnessing by video call

It also provides legal cover to those who have used video witnesses prior to this event (retrospective of the 31st of January).

One thing to note is this new legislation is only temporary (until January 2022). However, this may be extended if it is believed necessary and the Wills produced in this time will only be valid if the guidelines have been followed.”

To read the official article please use the link below:
https://www.gov.uk/guidance/guidance-on-making-wills-using-video-conferencing
We are delighted that it will soon be possible to implement will witnessing by video call.
Contact us for more information.

In the existing law a witness must have a ‘clear line of sight’ of the will-maker signing and understands that they are witnessing and acknowledging the signing of the document, for example if self-isolation or social distancing have prevented the signing and witnessing of a will by people in the same room.

The person making the will must have a clear line of sight of the witnesses signing the will to confirm they have witnessed the will-maker’s signature (or someone signing on their behalf and at their direction).

The following scenarios would lead to a properly executed will during the pandemic within the existing law, provided that the will maker and the witnesses each have a clear line of sight:

In the new law, all of the legislation set out above applies where a will is video-witnessed.

The type of video-conferencing or device used is not important, as long as the person making the will and their two witnesses each have a clear line of sight of the writing of the signature.

To reflect this, the will-maker could use the following example phrase:

‘I first name, surname, wish to make a will of my own free will and sign it here before these witnesses, who are witnessing me doing this remotely’.

Witnessing pre-recorded videos will not be permissible – the witnesses must see the will being signed in real-time. The person making the will must be acting with capacity and in the absence of undue influence. If possible, the whole video-signing and witnessing process should be recorded and the recording retained. This may assist a court in the event of a will being challenged – both in terms of whether the will was made in a legally valid way, but also to try and detect any indications of undue influence, fraud or lack of capacity.

The following scenarios illustrate circumstances in which video-witnessing might be appropriately used:

the testator (T) is alone and witness one (W1) is physically present with witness two (W2). Together, W1 and W2 are on a two-way live-action video-conferencing link with T

T, W1 and W2 are all alone in separate locations and are connected by a three-way live-action video-conferencing link.

T is physically present with W1, and they are connected to W2 by a two-way live-action video-conferencing link.

T is physically present with a person signing the will on their behalf (and at their direction), and connected to W1 and W2 by two or three-way live-action video-conferencing (depending on whether W1 and W2 are in the same or separate locations)

Signing and witnessing a will by video-link

Signing and witnessing by video-link should follow a process such as this:

The witnesses should confirm that they can see, hear (unless they have a hearing impairment), acknowledge and understand their role in witnessing the signing of a legal document. Ideally, they should be physically present with each other but if this is not possible, they must be present at the same time by way of a two or three-way video-link.

The next stage is for the two witnesses to sign the will document – this will normally involve the person who has made the will seeing both the witnesses sign and acknowledge they have seen them sign.

The Government has decided not to allow electronic signatures as part of this temporary legislation due to the risks of undue influence or fraud against the person making the will. These risks were identified by the Law Commission in its 2017 consultation paper on wills. The Law Commission is undertaking a law reform project which will include consideration of the possibility of allowing electronic wills in the future.